The Invention of Happiness (Fermented Rice) 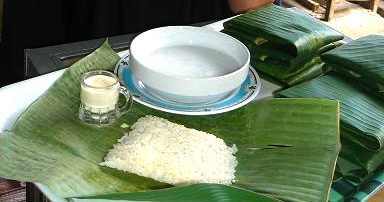 Spirits rice and the brew are unrehearsed. Fermented rice is made with yeast and water, and by chance, emerges a rice dish with a hint of sweet alcoholic savor. Good fermented rice is just like a good ulam, a nice condiment, a sweet dessert, or an intoxicating drink. It sparks an appetite. It is no longer "kanin at ulam" when kanin is the bland compliment for the dominant flavors of ulam. It is now "kanin ay ulam", when fermented rice, serving also as the ulam, becomes the main body and note for the kanin.

However, results are unexpected, at times even disastrous. Part science, part magic, the fermentation of rice with yeast produces alcohol, which when done right, gives the rice a tangy taste, leading to a feeling of joy, delight and happiness. No wonder, fermented rice in its various forms finds its way in many rituals as fermentation, like the ritual, is a manifestation of great transformation. Both are expressed in celebratory practices of communal joy and happiness.

Rice fermentation, however, is not given much attention in Philippine food literature and recipe books although Filipinos have long made fermented rice as part of their diet and celebratory traditions. Antonio Pigafetta, the chronicler of Ferdinand Magellan's westward navigation of the world and his 1521 arrival in Samar and Cebu, noted the word "tinapai" in his early lexicographic notes. Tapay or tinapay, while Pigafetta simply noted as "acerte fogacie de rizo or certain rice cakes" is fermented rice bread or puto, while tapayan is the earthen jar where rice is fermented. The word tinapay is now extended exclusively to kneaded wheat bread and to the sacred hosts, while tapayan loses its exclusive utility for rice fermentation.

Many Filipino ethnolinguistic societies use fermented rice as an important ritual component because, as the prominent Filipino anthropologist Jesus Peralta noted, "it is considered the best offering to the deities since it is something the deities cannot make". Ifugao tales recall how a mortal would steal rice from their deity Lumawig by hiding a grain under his tongue. For the Teduray of Cotabato, not only that the rice was a gift from the supreme being Minaden, but also the very soil in which the grain was planted came from his brother Meketefu. However, Ibaloy legend credits it to an ordinary woman the invention of fermenting rice to make tapuy, who did it by simply observing the happy mood and blissful sleep of a bird and a dog she had fed with a mixture of angbad seeds and boiled rice from her basket. The Kankanaey of Sagada recalls the legend of Biag, a folk hero in the canonical texts of Pisang or Oton de Tapey (Cooking of Rice Wine). The "wine" referred to is a food rather than a beverage, i.e. fermenting saliket rice which, as William Henry Scott noted. "even a day-old baby is given an equal share." The legend calls attention to the fact it was the fermented glutinous rice which satisfied the multitude rather than the ordinary fare. 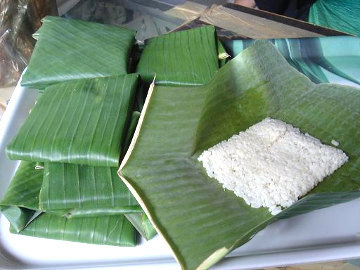 The Maranao tapay is fermented rice wrapped in fresh banana leaf. It is prepared using ordinary rice that is boiled either in plain water or in coconut milk. Yeast is added to the freshly cooked rice, and allowed to cool and ferment for a day or two in a covered container. It is kept undisturbed until it starts to ferment. The ongoing fermentation process would cause tapay to emit a liquor-like odor and taste. A scoop of tapay is taken out and spread on a freshly cut banana leaf or the wide leaves of alum tree. Tapay is served in a bowl with coconut cream, fresh milk or evaporated milk chilled with crushed ice. Roasted grated coconut meat with brown sugar called ginti can be added to the mixture.

Binuburan is actually the first stage in the process of making tapuy, the rice wine of Northern Luzon. It is in the phase when the rice has just been inoculated with the fermenting culture called bubod, bubur, bubud, budbud, sometimes budbod, and has yet to turn alcoholic. The key ingredient can either be sweet sticky rice (for stronger wine taste) or red rice (for sweeter gruel). Kept in covered container for three days it starts smelling like alcohol. In five days, it is ripe with alcohol, while the rice remains sweet and for nine days, for a very intoxicating binubudan and bittersweet taste. It is usually eaten at breakfast or merienda. Binuburan is supposed to be made in secret, without anybody knowing, with no one breaking wind, or it will not ferment. They would just know it when it is served...

Buro is made from fermented rice and fish (usually catfish or mudfish) while fermented rice with fresh shrimps is called balobalo, balaobalao, or tag-ilo. Though it could serve as the main ulam, it is commonly served as an accompaniment for grilled or fried fish, fresh mustard leaves, and boiled eggplant and okra. Sometimes, what distinguishes the balobalo is its color red due to angkak or red yeast rice using Monascus purpureus.

Henry Du Rest Phelan in 1906 recorded how the Ifugaos make the rice brew called bubud. He observes that a "handful of powdered rice is mixed with the strongly acid juice of a vine and then dried in the sun. Rice is next boiled with water and some of the first mixture is added to it, when it is all placed into a jar and allowed to ferment for eight days." The best rice variety for producing tapuy is the saliket, the waxy or glutinous rice. The round and short grains of glutinous rice is ideal for rice wine making, The starter culture, bubod contains microorganisms that convert the starch to sugar (saccharification); and then the sugar to alcohol (fermentation).

Fermenting rice indicates a brewing Filipino culture that knows happiness once inoculated with the yeast of change.


This essay was a finalist and cited as Honorable Mention by the judges in the 2013 Doreen Gamboa Fernandez Food Writing Award Competition. The awarding ceremony was held on March 22, 2014 at the Raffles Makati Writer's Bar